Story of Our Ministry

While living in Oklahoma, my husband and I attended First Baptist Church of Ponca City, OK, where a pillow ministry was in full swing.  Pillows were made by the women of the church and used to comfort those members of the congregation who were in the hospital.  It was a hugely successful ministry.  My husband and I later were taking up a permanent residence in Florida, and found ourselves in the beautiful First Baptist Church of Orlando, http://www.firstorlando.com/  I knew I would like to get a similar ministry started here in Florida but I didn’t know quite how or when to do that.

So I said to God, “Ok, I am ready to move forward with these pillows, but how?  What does it look like, God?  Who gets the pillows?  Is now the time?”  The pillows had always gone to people within my circle of relationships but I sensed God telling me it was time to step out of my comfort zone.  One day as I was driving on I-4 and exited the freeway, I saw a homeless lady begging at the corner and a question popped out at me, “What if we gave the pillows to homeless people?”

I have never known any homeless people in my life and I really didn’t know if they would want a pillow or not.  By God’s divine providence, it just so happens that there is a lady in our Lifegroup at church, Cathieann Ramirez-Soto, who had experienced life on the streets.  (Her testimony is found on this website.)  I called her asking her thoughts on our giving pillows to homeless people.  Would homeless people want those pillows?  That conversation ramped up the pillow ministry in a way I would have never thought of on my own.

Weeping, Cathieann recalled her life on the streets and said to me, “Barbara, when you live on the streets, it is so lonely and scary! You think nobody cares.  When someone does something kind for you, it is HUGE!  Yes, I think homeless people would love to receive these pillows.”

With our teacher's blessings (Soul-diers for Christ Lifegroup of First Baptist Orlando), things really began taking off.  From that point forward, several ladies in our Lifegroup began to get involved by helping sew the pillows.

On April 15, 2014, we made our first run to give pillows to the homeless people of Orlando, Florida.  Three of us went as Cathieann led the way with her fearless, bold, yet compassionate approach to the people, encouraging them with her testimony.  We gave away 9 pillows the first day.  We could have given away so many more!

Today we are giving the pillows to homeless people on the streets, children in the homeless shelter, as well as to our friends and family in their hour of need.  It is such a simple concept that a small pillow would bring comfort, but in fact, the pillows do that very thing.  From the very first, God has affirmed the ministry so many times.  He is showing us that if we will serve Him, shine His light in this dark world; He will bless the work that we do.

Thanks be to God, 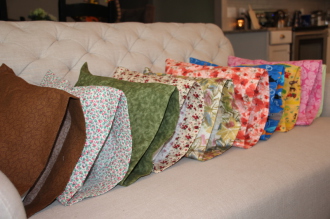