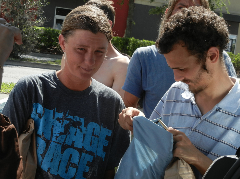 Just when we thought today was very slow and we had not seen much fruit from our efforts, God was faithful.  After spending time with a few people for less than an hour, Jerry led us in a prayer.  We didn't see anyone else to minister to in the location where we were at, so his prayer went something like this: "Please Lord, we are rather ignorant at this.  So, please send us to the right people to minister to."  After the prayer, we took one more swing through the parking lot, where previously we had seen no one, and there they were...Donna, her son Jeffrey, and her boyfriend, George.  We have seen Donna on many occasions.  The picture to the left was taken many months ago when we first met Donna and Jeffrey.

The disturbing thing about today's encounter is that Donna had been involved in an altercation in the middle of the night back on November 4.  Two men came into their homeless camp and began attacking her with a box cutter.  She now bears the scars from that attack.  On her face, she now has a 3-4" scar that reveals the terror of that night.  She showed us many more scars to match.

Marcy was able to share the gospel message with Donna, who listened very intently.  She asked for one of the Bibles we had.  We believe that Donna has made a profession of faith in the past, as she told us she has been baptized a couple of years ago.  When Jerry asked Donna if she would like to come to church, she lit up and said, "Yes!"  At this point, we are planning on taking Donna and her son to the Christmas Eve service at our church.

The extent of Donna's wounds brings to light the seriousness of our mission.  It makes us ever mindful of the danger lurking on the streets, as well as the importance of sharing the gospel with these people.  We are a team of believers who feels priveleged to serve God in this way.