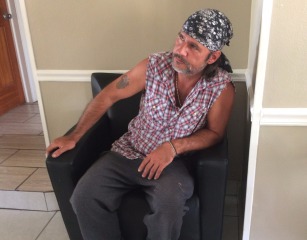 Today was a different day for us.  It is the kind of day you dream of in ministry...a day when you truly get to help someone in need.  The person we helped was this man, Ron.  We met him near Lake Dot in Orlando, a broken man, ready for help.  He admitted he was an alcoholic and said, "I can't do this anymore.  I need help."  So, we made some phone calls to our contacts and to make a long story short, we were able to get him in to a treatment facility that very day.  We took him to the Central Care Mission, a Christian based rehab program for addicts.  The miraculous thing was that evevn though he smelled like liquor and freely admitted he had taken a drink that morning, they accepted him.  Normally they do not  take anyone who has been drinking into their facility on that day.  But I believe God was at work, and they sensed that Ron was serious about his recovery.  We hope to hear from Ron in the future.  Barbara