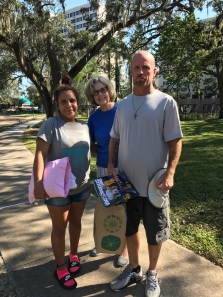 Hurricane Irma left Orlando in somewhat of a shambles in many areas. We were thankfully assured the homeless could find safety within public shelters during the storm. We prayed for our friends and had hoped to visit once again after the storm. During our October 10th street ministry we were blessed to meet Connie again. She reported several street folk had taken shelter in another area and were safe. Connie told me she was provided shelter beneath someone’s porch.

These are the stories we encounter. These precious folk show no abasement when sharing such news. This is their life, this is routine. We listen, we share, we pray, and we love.

Barbara and I met this couple. Jody and Bill told us they were displaced during the storm and arrived in Orlando from Miami. Both had spent the night sleeping in a grassy area along the Lake Dot shoreline. Our church has provided a new publication called Victorious Living. Many of the published stories provide hope and encouragement. We are so thankful for lives that have been changed. Perhaps Jody and Bill will someday find themselves living victoriously through Jesus.