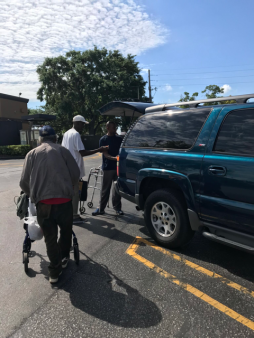 On April 15, 2014, we made our first trip to the streets of Orlando.  That was four years ago!  My head and heart are full of the people and stories we have encountered in the past 4 years.  If you had asked me four years ago what this minisry would look like in April of 2018, I could have never predicted all that would happen.

Today, when we went to Lake Dot, we encountered a man who almost demanded that we go to 7/Eleven and buy him a bus tiket to St. Pete.  When we told him we could not do that, he became angry and verbally abusive to us.  It was a little scary, but once again God protected us.  Later on as we went to other places, we experienced nothing but grateful hearts.  In fact, I heard at least two men tell us to "keep on doing what you are doing."  Yes, we will keep on doing this until God calls it to an end.