Young's Grocery store on OBT was so busy today!  Seems like Spring has sprung in Orlando, because we saw so many people and handed out all of our pillows.  One man in particular that we met was DJ (shown in photo with Jerry).  As Jerry witnessed to DJ, he discovered that DJ is a believer.  The 2 of them even shared a time of prayer together.  DJ said he has been considering attending our church, FBC Orlando.  We hope to see him there soon.

On another note, Marcy and Sandy witnessed to a lady who accepted the Lord.  As they were sharing with her, and her thoughts were all over the place, she suddenly began to relax and focus on what they were saying.  After accepting the Lord, Marcy gave her a Bible and highlighted some verses for her.

After our time at Young's Grocery, we headed over to Right Fuel For The Glory of God, Charles' gas staion.  All morning we had been directing people over to Charles, as we know he is the one who can follow up with all the people we talk to at Young's.  Compared to Young's Grocery, it was pretty quiet over there.  Charles tells us that he has lost about 70% of his customer base since he turned his life around about 9 months ago.  Since changing the merchandise he sells in his store, the amount of traffic in his store has decreased tremendously.  No more drug deals and prostituting on his property...praise God!  We are committed to partnering with Charles and helping to promote his efforts to reach people for Christ. 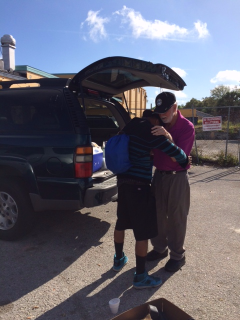 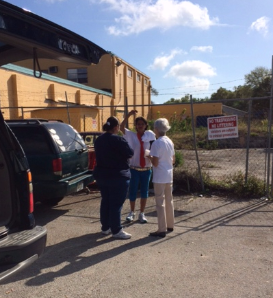